The House Majority Whip asks a fellow congressman into his office to share his ideas about the healthcare legislation that must be passed in the new president’s first 100 days. The Whip is handed a document which he glances over and partially shreds. His next step? Forward it to a journalist to get published to the world. Sound familiar? In Netflix’s hit series, House of Cards, leaks are what make the wheels turn. Politicians use leaks seemingly without end for one purpose–to make themselves more successful. Tech and AI giant Apple may not use them so nefariously, but recently leaks about the new iPhone 8 seem to be happening with increasing frequency. As the release date nears, more and more features are being unveiled, ranging from AI software to exterior design. In fact, one developer, Steve Smith, has released some details concerning another one of the iPhone 8’s (possible) AI features.

Apple’s pending face recognition software, called BiometricKit, will purportedly be released with the iPhone 8. Steve Smith indicated as much in one of his tweets, though Apple has not officially mentioned its launch. The newest member of Apple’s signature line, according to reports, is expected to “have 3D face recognition capabilities which would be run using the device’s front camera.” The idea is that users will be able to unlock their new phones not by using a password or Apple’s Touch ID technology, but by simply holding their phones in front of their faces.The 3D face recognition software, which would run using the iPhone’s front facing camera, represents a giant step forward in AI and software technology.

As the release date draws near, Apple is hoping to really ramp up the capabilities and design of the product which represents a significant chunk of its revenue. The BiometricKit, which will be released alongside Apple’s new IOS 11, might in fact contain an API switch that “encompasses both Touch ID and facial detection on the iPhone.  It will likely allow developers to simply utilize it and let the API itself do the heavy lifting of figuring out which method of biometric security the device has.” The question arises whether or not Apple will continue its use of the Touch ID software, which has become a beloved feature for iPhone users. Touch ID not only allows users to login to their phone without typing in a password–it is their source of identity for almost all apps that require a security measure, including the App Store, banking apps, and password protectors. It is hard to see a scenario where the new face recognition software will function alongside the now outdated Touch ID feature. Still, reports have suggested that the iPhone 8 will still have a function area below the display, as well as the Home button which is essentially irremovable. This leaves open the possibility that the two could coexist.

The BiometricKit and face recognition software are part of a larger push that Apple is making to increase the security and privacy of their devices. The new features not only represent tremendous progress in the AI field, but also the incredible advances in user accessibility and practicality that have in the past beleaguered AI studies. IOS 11, along with its face recognition software, hopes to bridge the gap between iPhone security and the capabilities of new technology. Though it remains to be seen what exact features the iPhone 8 will contain, the developer leaks keep the watching world on the edge of their seats. If the iPhone 8 is as cool, crisp, and capable as recent leaks have indicated, Apple will definitely continue to redefine success. 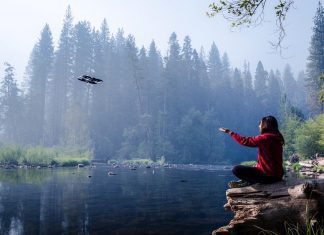 The New AI from Skydio Knows Everything

Jared Kingsley - February 16, 2018
0
Skydio is a young drone startup that was founded by grad students at MIT. They helped pioneer technology for autonomous flight by placing sensors...

The Nth party: compliance with anti-bribery and corruption laws

A cyber security guide for executives : Putting the Cyber Landscape...